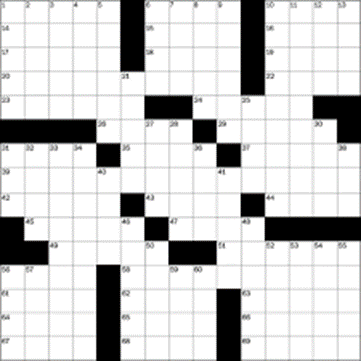 The crossword puzzle tends to spike in popularity amidst crisis. Arthur Wynne invented the crossword in December,1913, the cusp of the Great War. Originally called the word-cross, a typographical error switched the words around and the title stuck. Simon & Schuster published the first crossword book in 1924 which sold over 100,000 copies.

The New York Times criticized the crossword and called it “primitive.” However, in 1941, the crossword provided an escape from the war. Only two weeks after the USA joined WWII, the Times editor pushed to publish the crossword. And in February 1942, the Times published a crossword for the first time.

During the pandemic, many found crosswords to be a good pastime as they endured quarentine. A Barnes and Noble employee told me that he noticed a significant increase in puzzle sales such as crossword books and jigsaw puzzles. But in the twenty-first century, electronic crosswords have replaced pen and paper to a degree. Newspapers such as the Washington Post, New York Times, LA Times, and more have their crosswords available for free online. Smaller newspapers and other publications such as The New Yorker require a subscription to access their puzzles. In addition, there are many crossword apps. Teazel’s The Big Crossword has a 103×103 grid and 1284 clues.

If you are interested in unleashing your inner cruciverbalist, a person skilled at crossword puzzles, here are some great tips and ideas to get you started:

Themed crosswords count as studying. If you are studying chemistry, there are crosswords with a periodic table theme. For example, one clue was “‘Sister Act’ Star & EGOT winner” the answer: Whoopi Goldberg.
It’s okay to use Google. When the crossword first grew in popularity, people swarmed to the reference sections of libraries. However, typing in the clue word-for-word counts as cheating.
Skipping around to fill in clues you know or to eliminate answers is a great strategy. If you have a clue with multiple possible answers, then try to find the answers to clues with boxes that intersect to narrow down the possibilities.
Any good crossword puzzle’s clues tense and form will correspond with the tense and form of the answer. But more challenging puzzles with cryptic clues may be an exception.

While crossword puzzles may not be everyone’s cup of tea, cruciverbalists find them a fulfilling pastime. If you are interested in crossword puzzles, pull a Wyatt S. ‘22: upon completing your classwork, Google search “crossword,” choose a puzzle, and work on it until the bell.